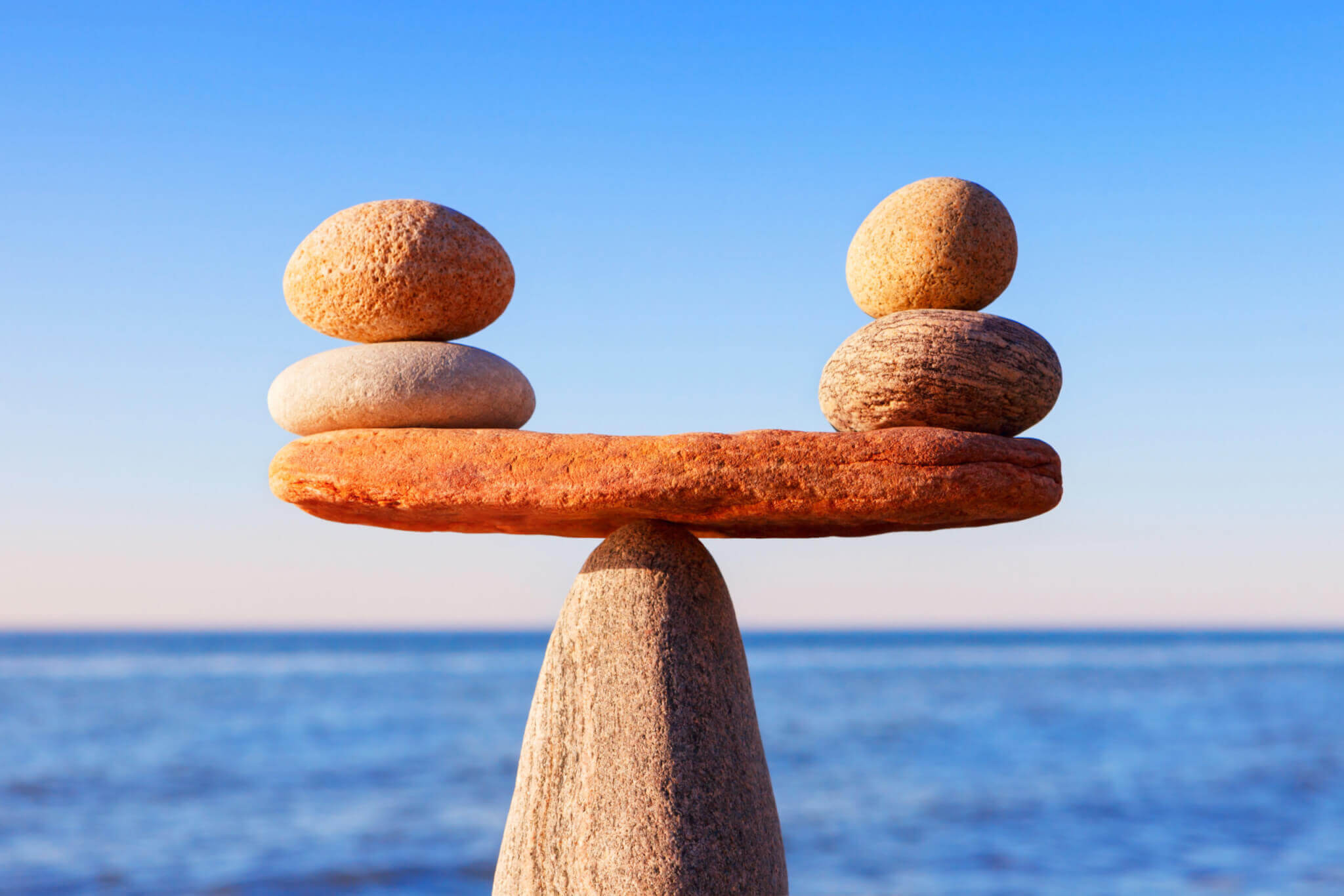 Equanimity is the last of the ten parami of Buddhism. When we develop uppekha parami, it’s a feeling of being above and not being involved with things around us. But it’s not a dry neutral feeling. Rather, equanimity radiates warmth and is an accepting open feeling one has for other beings. At the same time, equanimity has the deep understanding of cause and effect that all beings experience the effects of their own karma.

You know karma is a self-created experience and suffering is self-caused. But equanimity is not indifferent to the experience of suffering of self or others. You don’t say, “This is your own fault. This is your karma”. Instead, one observes to see if there is a possibility to intervene and reduce the suffering of others. However, if one cannot do anything, one simply observes and does not get involved.

Equanimity is described as one of the most sublime emotions of Buddhist practice. It is the ground for wisdom and freedom, as well as the protector of compassion and love. The Buddha described an equanimity-filled mind as “abundant, sublime, immeasurable, without animosity and without ill will.

In India, uppekha is also translated as “seeing with patience. We can also say a seeing with understanding. For example, when we know that we are no longer taking offensive words personally, not reacting to them, there is equanimity. This comes from letting go, from being detached from what is happening externally. We remain relaxed and equanimous.

The Seven Mental Qualities of Equanimity

One approach to developing equanimity is to cultivate the qualities of mind that strengthen equanimity. There are seven qualities. The first quality is morality or ethical principles. When we have integrity and are inwardly certain that we are not producing harm to ourselves or others, that gives self-confidence, and that too is equanimity.

Buddha said that anyone who has moral integrity can perform in any social setting with a certain level of certainty. Then equanimity comes from the purity of mind.

The second quality would be trust. With confidence, we can practice and meditate no matter what obstacles arise. We can see them and accept them as they are, but continue to practice with equanimity. Especially trust based on wisdom is very powerful. The Pali word for trust (saddha) is also translated as confidence.

A well-developed mind is the third support. This means that we have the mental stability to develop concentration and mindfulness, which are very good foundations for equanimity. If the mind becomes calm and stable, the eight worldly dhammas (Loka-dhamma) can no longer throw it off balance.

The fourth quality is well-being. This is something we don’t often cultivate enough. Yet it is important for the practice that we feel good. For example, one can make a delicious tea and drink it with pleasure. And by being whole about drinking it, one can allow well-being to arise within oneself. This is incredibly supportive in the whole meditation practice and also for equanimity because equanimity only works when there is also well-being.

The fifth quality for equanimity is understanding. This means that we learn to accept the present moment as it is. Often we cannot accept the present moment because it is painful. There is pain in the body or pain that arises in contact with others. But we should realise that by not accepting it, everything only gets worse. Because suffering is a part of our life and a part of nature. We need to accept this. By doing so, we will reduce the resistance to the present situation and the suffering will decrease.

Wisdom is essential to learning to accept the present moment and to be present to what is happening without resistance from the mind.

Wisdom can teach us to separate people’s actions from who they are. We can agree or disagree with their actions, but yet remain balanced in our relationship with them. Wisdom also helps us understand that our own thoughts and impulses result from conditions. Not taking them so personally makes it more likely that we will remain relaxed when they arise.

Wisdom understands that people are responsible for their own choices, which helps us find equanimity in the face of other people’s suffering. We can wish them the best, but we avoid a false sense of responsibility for their welfare.

Insight would be the sixth quality of mind. This is the insight into the deeper nature of being. When we realise that things are impermanent and constantly changing, that they cannot be held on to, then equanimity comes from letting go. The more we can let go, the deeper the equanimity.

The last quality would be freedom. The point here is to realise that freedom comes when we stop reacting. One observes, lets go, simply watches. Once you experience this non-reaction and practice it again and again, then you see how this gives rise to equanimity and freedom.

There are two forms of equanimity. The first form comes from observing what is happening on the outside. The second form is based on inner balance. In mindfulness practice, both forms come together and unite. When mindfulness becomes stronger, equanimity also increases. When equanimity becomes an inner force, it leads one to maintain inner balance for much longer, and this is possible even in difficult situations.

Equanimity in the Four Brahmaviharas

Equanimity is a part of the four brahmaviharas, the divine abiding states. The first brahmavihara is metta, loving-kindness, the second is karuna, compassion, the third is mudita, compassionate joy, and the fourth is equanimity, uppekha.

The brahmaviharas manifest in a way that one observes a situation and acts when it is possible. If it is not possible, one remains in the observing position. But always together with compassion for the other beings. That would be equanimity in the sense of the brahmaviharas. We are not indifferent, but always there when it helps others. Especially as a brahmavihara, uppekha is associated with a willingness to help, to show kindness, to intervene immediately when the opportunity arises.

Equanimity also has the function of a comprehensive overview. If all factors involved in an event interact correctly, uppekha only has to monitor the course of the natural development. It is comparable to the work of a coachman. When the horses are running at the right pace and the carriage is driving well, the coachman holds the reins but does not intervene. He only observes and is not indifferent, because he must pay attention to the horses and the path.

Equanimity in the Meditative Recesses

When someone practises jhana – deep concentration, it also works only with equanimity, which must be present. In the deep concentrated state, equanimity stands for strong stability. It ensures that one is not thrown off balance by either external sensory impressions or internal emotions.

Equanimity is both a parami and a bojjhanga, one of the thirty-seven limbs of enlightenment. In both, it has the function of equanimity, no matter how difficult circumstances in life may be.

The eight loka-dhammas appear again and again in the Buddha’s discourses. These are gain and loss, praise and blame, good reputation and bad reputation, and suffering and happiness. To practice Upekkha means to remain steadfast and neutral in the face of the eight worldly dhammas of life.

Buddha said, “Gain and loss, praise and blame, joy and sorrow come and go like the wind. To be happy, you must rest like a giant tree in the midst of all these things.”

The eight loka-dhammas are also called the eight worldly winds. A big, strong tree that defies all winds.

Far and Near Enemies of Equanimity

Bikkhu Bodhi writes about equanimity: “The true meaning of uppekha is equanimity, not indifference in the sense of being indifferent to others. As a spiritual virtue, uppekha means stability in the face of the fluctuations of worldly fortune. It is balance of mind, unshakable freedom of mind, a state of inner equilibrium that cannot be disturbed by gain and loss, honour and dishonour, praise and blame, joy and pain. Upekkha is freedom from all points of self-centeredness; it is indifference to the demands of the ego-self with its desire for pleasure and position, not for the welfare of fellow human beings. True equanimity is the culmination of the four social attitudes that the Buddhist texts call the divine abiding states or brahmaviharas: loving-kindness (metta), compassion (karuna), altruistic joy (mudita), and equanimity (uppekha). The latter does not override or negate the previous three, but perfects and completes them.”