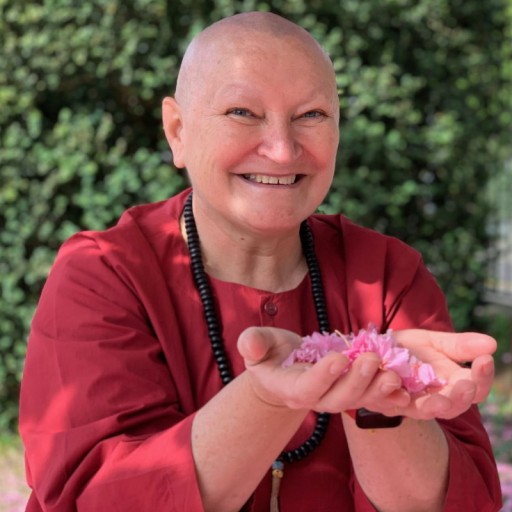 Who is MC Brigitte?

1994 she moved to Sam Chuk, Suphanburi to study Samatha-Vipassana (“Buddho” technique - as taught by the most Venerable Luang Poo Mun) with Phra Acharn Sangwahn Khemako for 7 years.

2006 MC Brigitte moved to Wat Pa Charoenrat Dhammaram in Pathumthani Province and continued to practice and teach with the Venerable Phra Acharn Veeranon until 2007.

Since April 2009 MC Brigitte teaches at Wat Prayong Gittivanaram International Meditation Center. MC Brigitte started teaching monthly courses at Wat Prayong – every 1st to 7th of the months. Every Year she organizes a New Years Retreat from 1st to 9th January in the Khao Yai mountains.

She frequently teaches retreats at other locations like the World Fellowship of Buddhists in Bangkok, at Chiangmai and Chiangrai Province in Thailand and was invited to give advice to “Monks in Training to go Abroad (Phra Dhammatut)” to spread the Dhamma .

From March to July she usually teaches Meditation Retreats abroad.

- supporting students in Thailand, Nepal and Bhutan with school fees and school uniforms

- supporting the building of a Medititon Center in Phunaka Bhutan

- supporting victims of the earthquake in Nepal April 2015

- supporting Tsunami victims by building four houses on Lhanta Island, a “Kindergarden” and a community Center in Puket (2004)