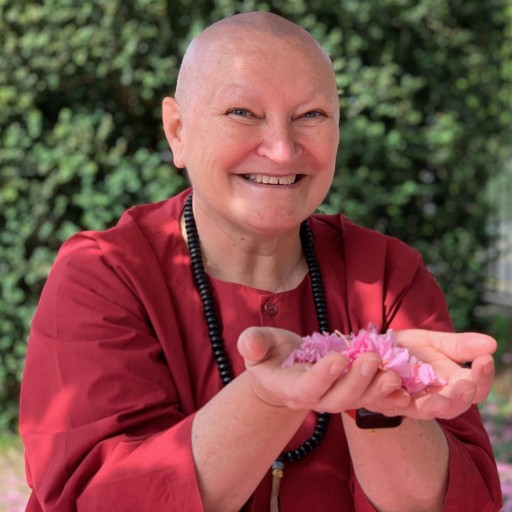 My life as a Buddhist nun

I was asked by my teacher to write something about my life and how I came to decide to become a nun. So here it is….

I am Brigitte Schrottenbacher, an Austrian nun, who has lived here in Thailand since 1989. I was born in 1962. When I was a young child, I liked the stories of God and Jesus and I really wanted to be a good human being. When I became 12 I lost my interest and just wanted to have fun like every teenager. When 20, I met Richard. In 1985 my daughter Melanie Sitara was born and in 1987 my son Patrick Elias. We had a good time together but there where two striking events.

My son was born at home and a deep depression followed after his birth for about a month. Every evening I felt a strong fear of death. I feared Richard might die or the kids. It was quite heavy. Later this feeling went away.

When Patrick was 8 months old, Richard's grandmother died and again this fear of death came up. It seemed to me people are born and die away and there is no refuge, no one can escape that. It made me depressed.

My best friend Andrea suggested to me that I go to a Yoga course with her. Although I was no spiritual person at all I went with her. At the first Yoga session we did I had my first experience of samadhi. After the exercise we laid down to mindfully relax and I felt as if there was a propeller turning in my throat. It felt as if I was lifted up into space. That was overwhelming. Although I had experience with drugs nothing was comparable to that feeling. From that moment on I became very interested in spiritual matters.

In April 1989 I went to do my first Meditation retreat in Thailand. In those two months of intensive practice I gained some insight into the unsatisfactory, impermanent and non-self nature of our body and mind.

This changed my life. I went back to Austria but life there seemed to go on the same old unwholesome way and I didn't want that anymore. So after two months I went back to Thailand for my next retreat. This time I asked my teacher for permission to bring Richard and the kids with me. The teacher agreed and told me I could become a nun if I liked. That's what I wanted.

Going back to Austria I "packed" my kids, some toys and a little money and left Richard, who wasn't able to come with me. I ordained as a nun. My kids stayed in Thailand for about 9 months. I decided not to disrobe but to stay as a nun for the rest of my life. Richard really wanted to have his kids back and so I brought them back to their father who took care of them until they where grown ups.

I try to practice as good as I can, trying to share my experience with other Thai and foreign meditators, and I share my merit with my teachers, parents, kids, Richard and all sentient beings.

Buddhism for me is no religion – it’s a life-philosophy. You do not have to depend on a person or a god. You have to know and experience everything by yourself.

The Buddha said: "Do not believe in anyone just because he is a teacher, he speaks eloquently or is otherwise impressive. Do not even believe in my words - just because I said them, but try to experience everything by yourself. Only if you experience the Dhamma by yourself does it become your wisdom. Belief is only belief, not knowing, not wisdom. If you experience things yourself then no-one can tell you that it is not like that, because you know it from your own experience." This was the main point in Buddhism for me. You don't have to follow a teacher like a sheep follows the shepherd - you have to check it out yourself - is it as he said, or not?! If you cannot experience it by yourself, then it's not your truth. But of course, you need to try it - check it out. Through skillful instructions you can meditate and experience the truth of Dhamma. This is everyone's own job. No one else can do that for you.

We are quite lucky because we can still find good meditation masters who have experienced the path. They are excellent teachers and can give us instructions on how to experience these ourselves. That's very important. You can't understand just by reading a book or listening to a teaching. In that way you can only get worldly knowledge but no wisdom. You have to practice by yourself. If you really do this, you will have experiences and you will know the truth of Dhamma. It works only that way.

Sometimes people ask me about God. Yes - there are gods. Those meditators who developed the divine eye can see them and know that they exist. They believe in them, the way the Buddha taught about them. The Buddha knew everything. He had supreme knowledge about the whole universe and he knew about gods. He knew what "created" us. What created us is our own mind and not a creator outside of us. Check this out by yourself and you will know.

LAW OF CAUSE AND EFFECT (KAMMA)

There is suffering and there is the cessation of suffering and all of this depends only on your own mind. No one punishes you - you receive punishment because of your own unskillful deeds. No one rewards you - accept you yourself through your skillful deeds, speech and thoughts. Do good - receive good. Do bad - receive bad. That's all. There is no god creating this. It's you yourself, with your own mind. It's our own mind which creates everything.

If we see this law of cause and effect, we will be cautious, because we understand that with every unwholesome action we just cut ourselves. Through that understanding fear from doing evil (ottappa) and shame to do evil (hiri) arises in our minds. It's not fear from a god who punishes us. We can understand that every unskillful action leaves a negative imprint on our mind - and sooner or later this has to have its result which will be suffering - whereas every wholesome action will result in happiness and prosperity. It's all up to us. We can choose our present and future happiness or suffering.

The most important thing the Buddha taught is the cessation of all suffering. It means - no more birth, old age and death, becoming independent from suffering and happiness -the equanimous, cool mind. This is what we call Nibbana, the cessation of all suffering! There is no other religion teaching this way out of being reborn again and again in the different realms of existence.

Of course every religion is good and wants its followers to be good human beings. If they believe in rebirth they teach them morality, to prevent them to do unwholesome deeds which drag them down to be born in the suffering realms of hell beings, hungry ghosts or animals. They advise them to do good because this will lead to rebirth in a heavenly realm or at least as a human being. If they don't believe in rebirth they still teach them morality.

But where is the way out of this endless cycle? The Buddha found the way out and because of his infinite compassion he taught the way, which is called the eightfold noble path. The Buddha got enlightened about that there is suffering. He saw the cause for all the suffering which is attachment and realized it's cessation by eliminating the cause. We can do this by following the path which leads to the cessation of suffering (see eightfold path).

This is what the Buddha taught 2500 years ago and in the meantime millions of his followers attained this path and attained liberation from samsara (the endless cycle of birth, old age and death). Now, there are still Noble Ones in this world, who have attained the path, so we are lucky to be able to receive the identical teaching of the Buddha. We should not waste our life. We should check for ourselves for our own happiness and liberation!

Sometimes people say that those monks and nuns and Practitioners of the Theravada Tradition seemed to work only for themselves. They want to be liberated from the suffering in Samsara and do not care about others. I do not think it is like that. Of course we practice to develop wisdom but without compassion there can't be wisdom.

I see that every time I am able to make someone happy I do feel much happiness myself. With that happy mind it's easy to meditate. If the mind is unhappy it is very hard to practice. So whatever I can do for other beings happiness - is helping myself. If we get some insight into the suffering nature of Samsara, then we know that this suffering is not only our own experience but all sentient beings have to experience it.

Having the good fortune to have met a teacher who can show us the way out of this suffering - how could we only practice for our own liberation? For me this would not be enough. If we have been reborn again and again in Samsara then it seems to be logical that we used to be related to all sentient beings although we might not yet be able to remember each of those existences. If we contemplate we can see that the person in front of us was our mother in one of our past existences. She was unbelievably kind to us and now she is suffering. We know what it means to suffer and we know how to come out of suffering - how could we not help her?

This is a very important part of our practice. Some of my Dhamma friends practice intensive meditation but they still do not forget about others and every time they do their practice they share their merit to teachers, parents, beings dear to them and to all sentient beings. Others help through activities, like caring about those who need it - mentally or physically. Different people have different abilities and so the way they can be helpful for others is different but I think a student of the Buddha will naturally develop compassion. This is Dhamma - some maybe more some less but without compassion there can't be wisdom.

I would like to share all the merit that I have accumulated and it's resulting happiness from the past, present and the future to you and all sentient beings. May all beings develop compassion and wisdom and attain full enlightenment!