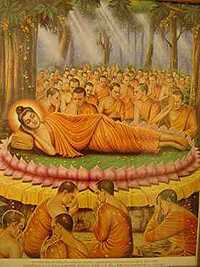 The full moon day of May is known as the Vesak Day. The Buddha was born, attained the Enlightenment and passed away on the Vesak Day.

The month of May is known as “Vaisakha” in Sanskrit language and “Vesakha” in Pali language and “Vesak” in Singhalese language.So for Sri Lankans and many other Buddhists, Vesak Day means the full moon day of May. Thai people know the same day as “Visakha Day”. By the United Nations it is recognized as the “Vesak Day”.

On the Indian borders of present Nepal in the Lumbinipark at Kapilavatthu a noble prince was born on the full moon day of May, in the year 623 B. C. His father was king Suddhodanaand mother was Queen Mahamaya. The newborn prince was named as Siddhartha. His family name was Gautama.

When he was 29 years old, he gave up his palaces, kingdom and everything and renounced the worldly pleasures in search of the truth. Then as an acetic He went to many well-known religious masters. By that He came to know that neither their methods nor practices led to final liberation or Nirvana. So He left them all and practiced the Middle Way or the Noble Eight Fold Path that includes Morality (Sila) Concentration (Samadhi) and Wisdom (Panna). The truth seekers did not know this method at that time. By practicing in this way He realized the real nature of the world, the life, and this is the attainment of Buddha hood. It was His 35th birthday, which also was a full moon day of May. That place where he sat for meditation on that night was later known as Buddha Gaya and the tree, which gave him the shade at the moment, was known as the Bodhi Tree.

The Buddha was not a god, a messenger of a god or a son of a godHe was a man. To attain this Buddha hood he fulfilled ten Paramitas or Perfections. These are Generosity (Dana), Morality (Sila), Renunciation (Nekkhamma)), Wisdom (Panna), Energy (Viriya), Patience (Kanti), Truthfulness (Sacca), Determination (Adhitthana), Loving-kindness (Metta), and Equanimity (Upekkha). In millions and millions of his past lives he practiced those ten perfections in order to attain the Buddha hood. With the attainment of the Buddha hood He came to be the teacher for gods and humans. There upon He wandered preaching the doctrine or the Dharma showing the way to get rid of birth and death circle of Samara out of compassion towards all the beings including human, divine, and Brahma beings.

When He was 80 years old He passed away on the full moon day of May in the Sala Grove of the Mallas between the twin Sala trees. His last advice was “all component things are subject to change. Strive on with diligence”.

Today His teaching is called Buddhism. To propagate it no one was converted by force and also for that purpose not a drop of a blood was shed, during the Buddhist history of 2549 years. So on this full moon day of May too all the Buddhists and Buddhist friends celebrate the birth, the attaining to the Enlightenment and passing away of the Buddha by practicing generosity, morality and meditation.